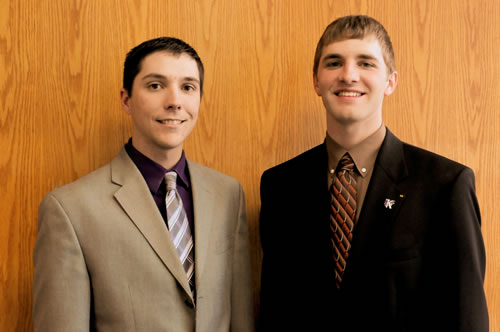 Tyler Schultz is a junior majoring in Animal Science with an emphasis in business. Tyler has been actively involved in his family’s registered Hereford operation. He is a member of the K-State livestock judging team and has been a member of the meats judging team. Schultz owns a herd of registered Polled Herefords and is growing his herd through the use of embryo transplant.

Jared Wynn is a junior Animal Science major at K-State. He is currently a member of the livestock judging team. Jared is a partner in his family’s Angus operation and upon graduation, plans to return to Ohio and assume the next generation of decision making in his family’s beef operation.

“It is exciting to participate in this process and see, first hand, the outstanding caliber of applicants,” said Mark Gardiner. “Just as Henry Gardiner did more than 60 years ago, we are confident that Tyler and Jared will complete their academic endeavors at K-State and return to their respective beef operations to make decisions and implement practices that benefit our food animal production system.”

The Henry C. Gardiner Scholarship is possible through the generous contributions of Gardiner customers, friends and family in an effort to continue the legacy of Henry Gardiner. Students classified as a rising junior, junior or senior, either enrolled in or planning to enroll at Kansas State University with a major in Animal Science & Industry or closely related field may apply. Scholarships are awarded annually to students meeting rigorous criteria and exhibiting a passion to focus on improving the beef industry.

Gardiner Angus Ranch is a family-owned and operated business that produces registered and commercial Angus cattle. The original ranch was homesteaded near Ashland, Kan., in 1885 by Henry Gardiner’s grandfather. The ranch encompasses more than 50,000 acres. The Gardiner operation sells approximately 2,000 bulls and 1,500 registered and commercial females a year. Over 80% of the sale offering each year is the result of embryo transfer.