We think the most accurate measure of success is through the eyes and experiences of our customers. This series of videos features customers that have turned their investments in Gardiner Angus Ranch genetics into profit. We appreciate their business and are grateful they were willing to share their experiences.

Rex & Craig McCloy (2017)
"We use Gardiner bulls and have since the late 1990s. We needed improvement and we're seeing the fruits of our efforts. We had tried different crossbreeding programs and our "black" cattle were grading 28% Choice. When we got involved with U.S. Premium Beef, the threshold for Choice was 55%. I just didn't want a discount! Today, we're above 90% Choice and above 10% Prime. The genetics are there to have 100% Choice. I'm not interested in buying bulls with no data behind them. I've got to know how these genetics perform on our place.
Gardiners go to the trouble to gather data and that's important. Today, I don't buy a lot of crossbred cattle. I just don't." —Rex & Craig McCloy, Morse, Texas
Watch video. 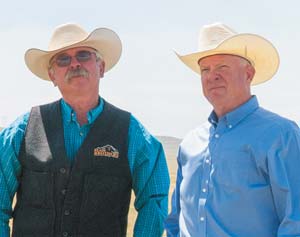 Ed & Rich Blair (2016)
"We've always used Gardiner bulls because you can believe the data. We never judge a bull until we calve out his daughters. We need to live with our cows for 10 years, so we cannot afford to use unproven bulls. A lot of our first calf heifers are 9 and 10 generations AI. We've been able to take our open heifers and feed 'em 100 days as eight-and-a-half weights. Those heifers have consistently graded 40-50% Prime for the last five or six years. In our system, our cows don't have to be top 1%. It's all about not making any mistakes.
Sometimes the purebred industry tries to make it way too complicated. If you can convince them they get paid more for marbling and ribeye, they'll go along with it. For the most part, our customers want functional cattle that don't cause problems."
—Rich Blair
Blair Brothers Angus, Sturgis, South Dakota
Watch video. 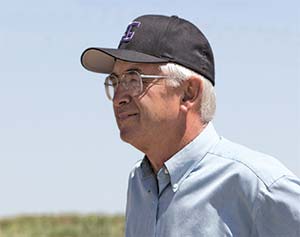 Sam Hands (2016)
"We started acquiring seedstock from the Gardiners in the early 90s. I had a concern, since we had an established crossbreeding program using Continental genetics, that we would give up something with Angus. Thanks to Henry's focus, we didn't give up pounds. We didn't give up performance. We gained carcass traits. We were able to double our percent Choice and also gain pounds and efficiency throughout the process. I give a lot of credit to our success at the packer level to the high quality genetics we obtain through Gardiner Angus Ranch and being able to market through U.S. Premium Beef. Pounds pay the bills, but quality is the difference between average and above average and profitability in our operation."
—Sam Hands
Triangle H, Garden City, Kansas
Watch video. 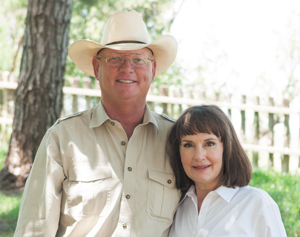 Mike and Shonda Gibson (2015)
"We've used Gardiner Angus Ranch genetics for 20 years and have seen a vast improvement in our cattle. Our cattle have gotten easier to handle. We've seen increased fertility and better weaning weights. All these things have improved because of GAR genetics. People come to me to buy my cattle. The females go into herds as replacements all over the country. This year, the steers in the feedlot finished 99% Choice. We used to be a fall calving outfit. We've switched to spring calving, basically February. That February calf is doing the same thing the October calf was doing for a whole lot less money!"
—Mike and Shonda Gibson
Gibson Ranch, Paducah, Texas
Watch video. 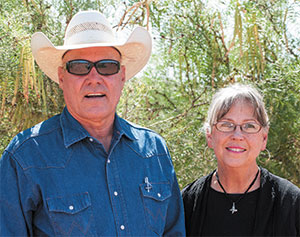 Jimmy and Linda Richardson (2015)
"We did the Southern Carcass Project here before Gardiner Angus Ranch did. We believed we had to have Southern type cattle to survive in the desert of southeast New Mexico. We worked really hard to do everything right. The problem was, when we sold our cattle on a video auction, our calves would bring $10 to $20/cwt less than any Gardiner Angus Ranch sired calves. I took that kinda personal! A friend of mine, that had purchased our calves before, told me if I thought my calves were worth so much, I should just feed 'em myself and see what they're really worth. So, I did. Unfortunately, he was right.
In the Southern Carcass Project, the cows were bred to Predestined and 5050. We used sons of those bulls and got the same results. We made progress and we made it fast. We weren't trying to prove anything to anyone but ourselves."
—Jimmy & Linda Richardson
Richardson Cattle Co., Carlsbad, New Mexico
Watch video. 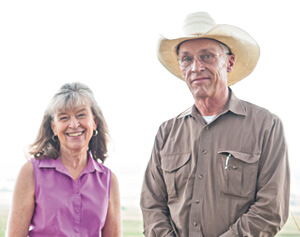 Ross Humphreys and Susan Lowell (2014)
"I have a business background. I got interested in Angus cattle because of the data. Our emphasis has always on calving ease. Now that we harvest all our cattle through U.S. Premium Beef, I'm placing a lot more emphasis on marbling and ribeye. As a rookie, the $Beef factor is easy since it is a composite of value. Last spring, our harvested cattle were 100% Choice or better, which is just what the data says. We harvest our cattle through U.S. Premium Beef, we get graded on the grid and we get paid for what we deliver. I wouldn't know a show bull from a puppy dog! I've only been able to do this by studying EPDs and data. I walk through several hundred bulls at the GAR sales each year, but all I'm doing is marking the bulls that I see with the EPDs that fit me. This stuff works!"
— Ross Humphreys and Susan Lowell
San Rafael Ranch, Patagonia, Arizona
Watch video. 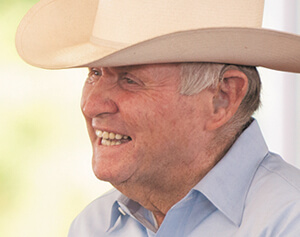 Buster Welch (2013)
"I've had the good fortune to train and ride some of the best cutting horses in the world. I expect and want the same level of performance in my cattle. We sold our calves to Bob Miller, buyer for Coleman Natural Meats, for more than three decades. We moved from crossbreeding to using Gardiner genetics exclusively 30 years ago after realizing we could feed our natural calves, without implants, for less than any cattle we ever fed or raised. Bob Miller told us that our cattle were the most profitable cattle in the entire Coleman Natural Meats program. I think Henry Gardiner and his sons have done more for ranchers like me than anyone in the beef business."
—Buster Welch, Rotan, Texas
Four time World Cutting Horse Champion, five time NCHA Futurity Champion, 2012 Golden Spur Award winner for outstanding contributions to the ranching and livestock industry, and has been a Gardiner Angus Ranch customer for more than 30 years.
Watch video. 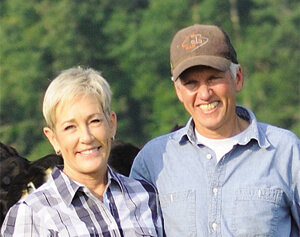 Cooper and Katie Hurst (2013)
"Buying our first bulls in 1999 was the right decision. We recognized early we didn't want to be in the commodity business. We knew we didn't want to make the investment to improve our herd and let someone else capitalize on it. Numbers don't lie. We share our numbers with Mark and we make decisions. We all live and die with the results. We know GAR genuinely cares about our success."
—Cooper and Katie Hurst, Woodville, Mississippi
Cooper and Katie Hurst speak about their Angus program, the decision to visit GAR and the importance of GAR genetics in their Mississippi program.
Watch Part 1 video.
Watch Part 2 video. 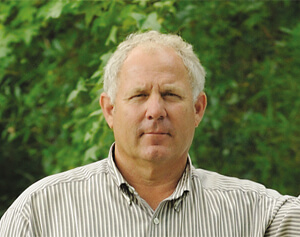 Dr. John Mazoch (2012)
"We started buying Gardiner genetics to improve our own herd. As we began to see improvement, our customers also saw a difference in our cow herd and gradually wanted to improve their own herds. We get the same or more growth with our GAR calves than our other breed influences and with a lot fewer problems. The cows breed earlier, calve easier and the GAR-influenced Angus calves are more vigorous. We only make money with live calves."
—John Mazoch, DVM, Bueche, Louisiana
Dr. John Mazoch talks about the decision he made more than 13 years ago to improve the quality of his Louisiana herd with GAR genetics. Watch video. 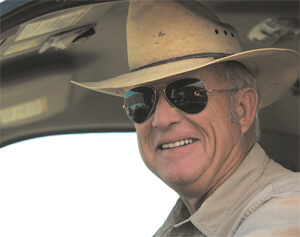 Joe Mayer (2012)
"We're a cow-calf operation and feed out all our steers and cull heifers. We also develop and sell bred heifers to other commercial operations. The worst drought in recorded history has forced us to liquidate much of our cow herd. Buyers are seeking elite genetics, willing to pay a value-added price and incur the freight to haul the cattle long distances. This experience has proven our many years of investing in Gardiner Angus Ranch genetics is extremely valuable, even in the worst of times."
—Joe Mayer, Guymon, Oklahoma
Lewis & Joe Mayer discuss the value of GAR genetics even in times of drought. Watch video. 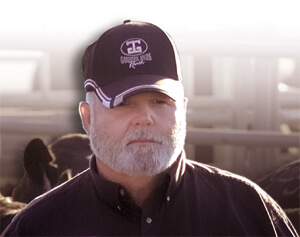 Randy Browning (2011)
"I retain ownership. I'm not interested in producing an average calf. Every calf must be above average when it reaches the packer for me to be successful. By using the genetics and information I get from Gardiner Angus Ranch and managing the best I can, I know I'm doing my part to produce a superior end product."
—Randy Browning, Appleton City, Missouri
Randy Browning documents excellent progress using GAR genetics. Read more and watch video. 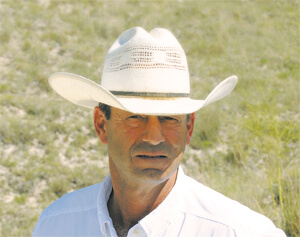 John Adams (2011)
"My dad always told me, 'Before you look at the cattle, look at the people. It's the people that stand behind the cattle.' My father bought our first Angus bulls from Gardiner Angus Ranch more than 55 years ago. We bought the bulls to use on Hereford heifers to raise replacements. Today, our herd is mostly black due to the improved performance our cattle have made using GAR genetics. In a way, Gardiner Angus Ranch forced us into the Angus business!"
—John Adams, XIT Ranch, Meade, Kansas
John Adams discusses the value of GAR genetics to Adams Cattle Co. and XIT Ranch. Watch video. 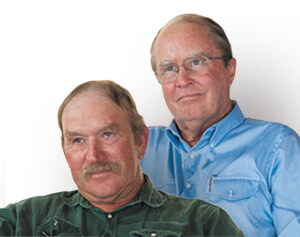 Jon and Bodie Means (2014)
"We have traveled extensively, since we were young men, to find good genetics. From the very beginning, our focus has been on developing the cow herd. We've always considered steers a by-product. If you saw our country, our cows and their heifer calves, they are excellent. The heifers were born in a drought. Their mothers were born in a drought. These cows rustle for food, breed back, calve on their own and can get around in this country. Fortunately, we met the Gardiner family on one of our bull buying trips many years ago.
Today, our relationship with Gardiner Angus Ranch is much more than a genetic resource for buying bulls. The Gardiners have become tremendous family friends while doing quite a bit of business for over 30 years."
— Jon & Bodie Means, Means Ranch Company
Jeff Davis County, Van Horn, Texas
Means Ranch Company is a fourth generation beef operation located in the vast and often very difficult Davis Mountains of West Texas. Means Ranch is a founding member of U.S. Premium Beef. Jon Means is the 2013 Golden Spur Award winner for outstanding contributions to the ranching and livestock industry.
Watch video.