The Tech Two Project is finished! 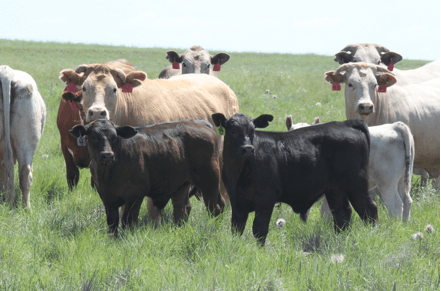 Cow-calf producers seeking genetic improvement have more tools available today than ever before. "It's an exciting time to be a beef producer," says Mark Gardiner of Gardiner Angus Ranch. "Rapid genetic progress can now be made in one generation by using selected technologies in a logical manner." That's the idea behind a unique research project being conducted jointly by Gardiner Angus Ranch and Zoetis Genetics.

Using DNA technology combined with artificial insemination to high growth/high carcass value Angus sires, the Technology Two-Step Project was designed to demonstrate that high quality grades can be attained in one generation starting with a base of females having limited marbling potential. The project ultimately produced 36 head of steers and heifers now on feed and slated for harvest in June 2014. Gardiner expects these cattle to produce a high-percentage of Choice grade carcasses, with a significant number attaining upper two-thirds Choice. "I wouldn't be surprised to see these cattle bring a $70 to $90 per head premium on the U.S. Premium Beef grid," Gardiner adds. "They should perform well in the feedlot and dollar-up on the rail."

The project began in April 2012 with the purchase of 104 head of mixed-breed heifers from a single Texas ranch. DNA testing revealed that these heifers, which had no history of selection for improved carcass traits, did in fact fall below average for marbling potential. "The DNA results identified a significant genomic weakness in marbling," said Dr. Jason Osterstock, Global Technical Services Head for Zoetis. "However, using individual animal genomic predictions, we were able to eliminate those heifers with the lowest marbling and quality grade potential, leaving a more genetically desirable pool of heifers to breed."

Slightly more than one-third of the original heifers were culled and not utilized for breeding. Culls included the 35 head with the lowest predicted marbling, plus one additional heifer that had an immature reproductive tract. Culling the lowest marbling potential heifers provided a more acceptable base to build on. Nearly half of the 68 heifers kept for breeding had marbling genetics greater than the average of reference cattle populations given the same DNA test.

Retained heifers were then synchronized and artificially inseminated to one of two Gardiner Angus Ranch bulls (GAR Progress and GAR Prophet) during early summer of 2012. These two sires rank in the top 6% of the Angus breed for calving ease, being suitable for use on heifers. Yet they also rank in the top 1% for the American Angus Association's $Beef index, indicating excellence in growth rate and carcass value traits. Calves resulting from these matings were born in the spring of 2013, weaned and backgrounded at Gardiner Angus Ranch, before being placed on feed in late November 2013 at Triangle H Grain & Cattle at Garden City, Kan. Calves were also DNA tested by Zoetis Genetics, and as shown in the chart below, their predicted merit for marbling was substantially greater than the culled heifers and their dams.

Gardiner and Dr. Osterstock note that the starting point of the project was a marbling MVP of -21.1, the average for the entire group of purchased heifers. The ending point after applying two steps of genetic technology is quantified by the progeny's average genomic prediction at +53.0. "We moved genetic marbling potential up 74 points in one generation, from significantly below average to the upper end of the bell curve," Dr. Osterstock explains. "That makes a positive statement about the use of technology for rapid genetic improvement, in this case, toward greatly enhanced marbling and quality grade attributes."

Gardiner finishes by saying the demonstration will be complete when carcass results on the project's calf-feds become available next summer after harvest. "We look forward to sharing the final outcome with the beef producers across the country," he relates. "This kind of research takes time and money, but has tremendous educational value for all of us."

Gardiner Angus Ranch is a family-owned Angus ranching operation located near Ashland, Kan. Gardiner Angus is dedicated to the production of quality beef from gate to plate. The Gardiners use their experience in beef cattle breeding, with state-of-the-art technology and data management, to produce Angus cattle that make documented contributions to the beef industry. The Gardiner operation registers more than 2,000 head of Angus cattle each year through the American Angus Association and encompasses more than 45,000 acres in southwest Kansas. The ranch is a founding member of U.S. Premium Beef, LLC.

Zoetis (zo-EH-tis) is the leading animal health company, dedicated to supporting its customers and their businesses. Building on a 60-year history as the animal health business of Pfizer, Zoetis discovers, develops, manufactures and markets veterinary vaccines and medicines, complemented by diagnostic products and genetic tests and supported by a range of services. In 2012, the company generated annual revenues of $4.3 billion. With approximately 9,300 employees worldwide at the beginning of 2013, Zoetis has a local presence in approximately 70 countries, including 29 manufacturing facilities in 11 countries. Its products serve veterinarians, livestock producers and people who raise and care for farm and companion animals in 120 countries. For more information on the company, visit www.zoetis.com.